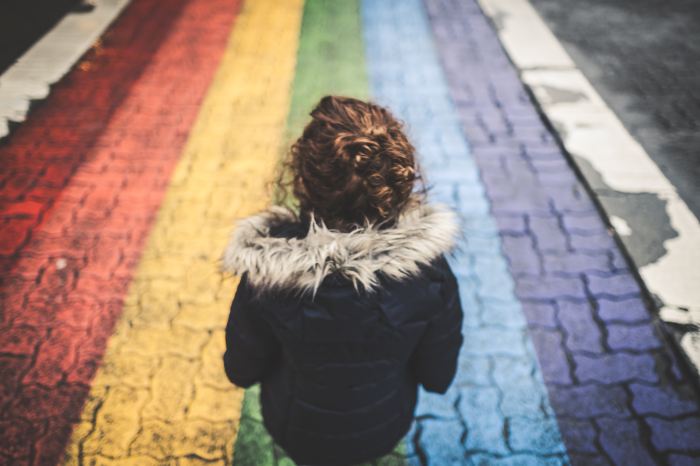 One year ago on July 3, 2018, I came out publicly for the first time. Even though I felt ready and had been waiting for that moment for over a decade, I still felt terrified. I remember writing my coming out post on the couch in my living room and being unable to hit “publish.” Eventually, I had to close my eyes, take a deep breath, and click.

Life has been a tangle of messes since last July, only some of them related to queerness. I just finished my partial hospitalization mental health program and am trying to integrate back into my everyday routine. I feel a combination of devastation and rage every day while I watch children get caged, women dismissed, trans women killed, and black voices silenced. I constantly wonder if I’m doing enough to help us overcome all this darkness. I’ve endured some difficult family conflict through cycles of anger and silence. In some ways, living my life as an out queer person has been a drop in the ocean.

In other ways, though, the luxury of being myself in the midst of all this roughness has made it more manageable. Last fall, I experienced Pride for the first time as an out person (Pride in Atlanta is in October…it’s a long story). I made my partner take pictures of me on every corner and wore every rainbow, sparkly thing I could fit on my body. I knew the queer community was bearing it’s own struggles – inclusion of trans voices, inclusion of POC, rallying around a central goal post-marriage-equality. But it was all to sparkly and new to me for any of that to tarnish the rainbows in my eyes. I was queer and you couldn’t shut me up. It was beautiful.

In the wake of my coming out, I received message upon message from other closeted people from every corner of my life. People I hadn’t spoken to in weeks or years contacted me to say, “Thank you for reminding me that I’m not alone.” My own long and arduous journey to being comfortable with my bisexuality was brought to mind as I talked with people who were still struggling to hold queerness and Christianity at the same time. It made me feel like, even though I was a baby queer, I still had valuable things to say to my community.

The past year, though, has also challenged my self worth in profound ways. In February, I the General Conference live stream at work day after day, waiting for my church to decide its fate. In the end, the United Methodist Church chose exclusion over love. As I watched the final count of votes project onto the screen, I fell to the floor in my kitchen, sobbing. I had given hours and years of my time and thousands of dollars to an institution that I believed could support me in making the world a better place. But instead of acceptance, what I received in return was pain and rejection. Many of my queer Methodist friends and allies remain in the church, and I am so grateful for their continued work to change this broken system from the inside. Right now, though, I am too tired and hurt to give any more energy to an institution that refuses to ordain me and the people I love. Right now, I can’t fight anymore. I am angry. I need a place where my personhood will not be up for debate. I haven’t found that home yet, but I know it’s out there.

Being out for a year has been a roller coaster, but I am most thankful for the small things. My freedom to post memes about bisexuality on Twitter, the bi flag in my pencil cup at work, my t-shirt that says “Jesus was Bi.” I don’t have to pretend to be an ally anymore. I am free to stand up and say, “These things apply to me. This community is mine too.” While my life is not nearly as risky or revolutionary, I feel a kinship this season with Marsha P. Johnson and her contemporaries – tired of being told who to be and where to stand, in pain but able to fight injustice, imperfect but willing to throw up my hands and say “I’m here and you can’t get rid of me.”

It’s been a long few weeks, y’all.  Since coming out, I’ve gone to Wild Goose Festival (still haven’t written about that adventure), hosted my childhood best friend’s bachelorette party, moved to a new house, and sprained my ankle.  It’s been a time.  But through all that, lurking in the back of my mind was how to make sense of why I felt like it was important for me to come out.

I’ve been asked this questions several times, sometimes from people who are not affirming of the LGBTQ community and other times from people who are supportive and trying to get to know me better.  At first, I wasn’t sure how to answer.  I could only explain my coming out by saying that I knew I had to.  I couldn’t resist it anymore.  A part of me that had been beaten, oppressed, locked away, and shamed for so long finally had a chance to creep out into the light, and I was tired of telling it no.  After years of therapy and self-reflection, I finally developed the courage to say “hey, this is who I am.”  And once I fully embraced that thought, there was nothing I could do to stop it anymore.  For me, coming out as bi has nothing to do with polyamory (although plenty of people of all different sexualities are and find it fulfilling) or leaving my current relationship.  I am happy with a straight man.  But I am still a queer person, and I’m tired of being erased.

Bi erasure is a problem even within the queer community.  I constantly hear people say that bi people are just gays who haven’t come all the way out yet.  While that can sometimes be the case, bisexuality is also it’s own legitimate identity.  When I’m dating a man, I’m not “straight.”  If I were dating a woman, I wouldn’t be a lesbian.  If I were dating a trans person, my sexual identity would not depend on how they identified their gender.  No matter who I am with, I am still bi.  My identity is my own identity, regardless of who my partner is.  I do not want half of who I am to be erased simply because of who I’m with.

But it’s more than that.  It’s not just about me.

In case you’re not aware, the United Methodist Church is currently in the middle of a years-long debate about human sexuality.  For the past several General Conferences (held every four years – lining up with presidential election years in the US), voting on issues of human sexuality has resulted in arguments, protests, tears, and an inability to understand The Other.  Because of this current debate, I knew that I was putting myself at risk by coming out and simultaneously being a Methodist clergyperson.  I haven’t yet received any feedback from the church, but, technically, I could have my clergy credentials removed.  LGBTQ people are not allowed to be clergy in the Methodist church, which is a primary issue up for debate at all of these conferences.

The people in the congregations I’ve served need to know that someone among them is queer.  So many people who believe damaging things about homosexuality think that they don’t know anyone who’s queer.  It’s easy to have hurtful opinions about a group of people that you don’t actually know.  It’s much harder to look a member of that group in the face and share those opinions, especially if that person is a member of your faith community.  So, by coming out, I hope to also start conversations with people who don’t know where they stand and also with people who do know where they stand and want to have conversation about LGBTQ issues.  So if you have questions, let’s chat.

I want everyone to know who I am, even if it means losing a few relationships with those who refuse to accept me.  In this politically horrendous time, I cannot be silent any longer.  In a time when Christianity is seen as an exclusionary religion, I want to invite people on the margins in by showing them that I am on the margins too.  Being queer means so many different diverse things, just like the rainbow we wave, and I’m grateful to finally be a public member of this community.  So, let’s allow all the colors to be visible and make the world a little brighter with how fabulous we are.